Saturday:  By Appointment Only

Four generations of the Schoenbauer family have built a company known coast to coast for superior workmanship and top quality customer service for the Repair, Restoration, Refinishing of furniture and art objects of all types, from fine antiques and family heirlooms to contemporary pieces and executive office furniture.

Schoenbauers restore all types of furniture.

The $10,000 vase from the Finnish embassy arrived at Schoenbauer Furniture Service in about 20 pieces. It left reassembled and looking new.

That’s just one of the many services the artisans at Schoenbauer perform on a daily basis. You name it, they can probably restore or refinish just about any type of furniture. They’ve refinished massive podiums in Senate hearing rooms, and NASA has asked them to refinish 30 tabletops a week. Not too long ago they tweaked the color tone on a $50,000 board of directors’ table.

They do small items as well. The April tornado that spun through Charles and Calvert generated two sea containers of damaged household items. 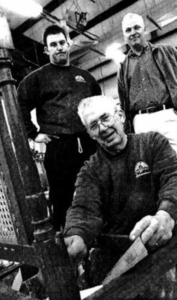 Bill Schoenbauer Jr. is the fourth generation of his family in the business of restoring furniture. After apprenticing with his father for more than 15 years, he opened up an 8,000-square foot shop in Charlotte Hall in 1991. Today among the firm’s 23 employees the Chopticon High School graduate counts his dad and mom, Bill and Pauline Schoenbauer Sr., his wife, Debbie, and brother, Mike.

“We’ve come a long way from working in a garage,” Mike Schoenbauer said. And in the process the company now ranks among the top 10 restorers in the nation, said Glenn Gardiner, operations manager for the business.

“The Schoenbauers are tremendously talented,” Gardiner said. “They can laminate on the spot, they can refinish on the spot.”

Most of their business is in a 100 mile radius of their shop, from WinChester, Va. to Baltimore. The company is looking to expand its presence in Southern Maryland.

“It’s been a goal of ours to increase our local business,” Bill Schoenbauer Jr. said.

At one point that was as much as 80 percent of their business. Now it has shrunk to 50 percent as the company expands into government accounts and commercial work. The number of residential customers is picking up quite a bit, too, Gardiner said.

They do little advertising. People have been known to chase their dark green vans on service calls in the metropolitan area in an effort to jot down their phone number.

It’s their attention to detail that is generating a buzz. Every week, customers drive down from Bethesda, Frederick and other places with treasured heirlooms in hand. Near Gardiner’s desk hangs a sign that says, “Quality you can count on, tradition you can trust.”

Perhaps that’s why some insurance adjusters just tell the company to repair an item and send them a bill, Gardiner said. “We’re their eyes and ears,” he explained.

Not much has changed in terms of equipment since Schoenbauer’s greatgrandfather, a cabinetmaker by trade, arrived from Germany. Epoxies have improved, but not much else. ‘The technology is not high-tech at all,” Bill Schoenbauer Sr. said.

The latest arrival in the shop was something most woodwork hobbyists have possessed for years: a router.

Other than that, “We have been using the same basic materials for 40 years,” Bill’s dad said as he was repairing a leather chair damaged in the tornado. And no, he is not crazy about the new epoxies, preferring the decades-old white glue.

Is there a fifth generation Schoenbauer ready to continue the trade? Bill Schoenbauer Jr.’s three daughters, Lindsey, Katie and Dana, haven’t expressed an interest. Mike Schoenbauer has a toddler and he hasn’t yet said if he’s going to pick up where his father will leave off.

It’s a business no one at Schoenbauers takes lightly “People trust them with their family heirlooms,” Gardiner said.

For more information go to www.schoenbauer.com